Nairobi, KENYA and Tokyo, JAPAN — Toshiba Corporation (Tokyo: 6502) announces establishment of its new branch office in Nairobi, Republic of Kenya under Toshiba Africa (Pty) Ltd, the company’s main subsidiary based in South Africa. Toshiba celebrated this important occasion with an opening ceremony graced by the Cabinet Secretary for Ministry of Energy of Kenya, Hon. Charles Keter, and other government officials and key customers. The branch office will start its operation from this month.

In recent years, the Africa continent has been gaining increasing importance in the global market and its eastern region has been identified as a highly potential economic growth area. The country Kenya is designated as a gateway to other countries in East Africa, with the region’s largest international port located in Mombasa, and it is expected to play an important role in boosting the continent’s regional economic development.

“I am very excited to be here in Nairobi for this momentous occasion.” Mr. Satoshi Tsunakawa, President and Chief Operating Officer of Toshiba Corporation, said in his ceremony opening speech. "Since the 1970s, Toshiba have supplied turbines and generators for 20 power plants across the African continent. We have also contributed to better and more comfortable lives by helping to harness renewable energy sources, including the geothermal power system at Olkaria. Equally important, we also provide world-class comprehensive services for refurbishing and upgrading aging thermal and hydropower plants. Here in Africa, we are sharpening our focus on how we can contribute to the future, and that is why we are now opening this Toshiba Africa Kenya branch.”

Toshiba opened its first Africa office in Johannesburg, South Africa, in 1967. The company has since supplied a wide range of products and systems such as Energy, Building and Digital solutions. Toshiba established subsidiary Toshiba Africa (Pty) Ltd in year 2014, and has been focusing on its business expansion in the sub-Sahara region. The new branch office in Kenya is positioned strategically as an incubation hub for Toshiba to foster innovation and be closer to its customers and partners as the company strengthen its presence in East Africa region. 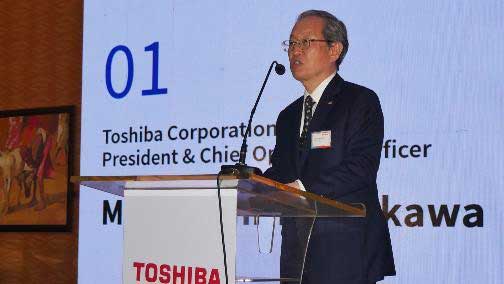